"Save this universe, or destroy it. The next legend is you." — Game Slogan

On July 4, 2008, the first conceptual art was released for the game. The first trailer was released on July 14, 2008. New concept art and screenshots for the game were released the next day. The developers held a Q&A on the same day, where players could ask questions about the gameplay and other aspects of the game. DCUO was also shown and playable in pre-alpha form at major conventions throughout 2009, such as New York Comic Con, E3 and Comic-Con International.

Gameplay DC Universe™ Online (DCUO) is a MMORPG set in the DC Universe™. Sony Online Entertainment is working to make DCUO more interactive than standard MMORPGs, while trying to keep key elements of RPGs, which include a leveling system and inventories. The world is mainly a shared, public space instead of heroes or villains owning territory. The public space features dynamically-generated content designed for both hero and villain player characters, which may lead to interesting Player Versus Player battles.

Players choose a city for their character, with the currently known cities being Metropolis and Gotham City. The character is given a Justice League of America or Secret Society of Super-Villians Communicator depending on their choice. For example, a hero character may encounter a thug robbing an armored truck while a villain character will instead rob the armor truck. It is also known that player characters have threat ratings which will cause heroes and villains to interact with the character.

IGN previewed a demo video, showing Brainiac infecting citizens with a virus that causes them to riot in the streets. Lex Luthor decides to test out his battle armor and Bizarro comes to "help". Superman, along with Supergirl and Green Lantern, helps the 'player' defeat the infected citizens and remove the nanovirus. It's not yet known whether this mission will appear in the final game.

Pre-order releases for the PS3 version of the game come with the first issue of the DC Universe Online comic book (Legends #0), a bonus Hero pack or Villain pack depending on which allegiance the player wants and the ability to play exclusively as Batman in a 2-on-2 battle.
The Hero and Villain packs include three bonus weapons; the Hero pack features the Bladed Batarang, the Bat-Grenade and Amazonian Gauntlets. The Villain pack includes the Joker's Trick Pistol, the Joker's Confetti Bomb and the LexCorp Kryptonite Blaster.

Other pre-order bundles include the comic book, the chance to play as Batman, and various items such as the Bat Drone, the Joker's Flying Jester and Deathstroke's Draw.

The Ultimate Edition (2015) is a value edition containing two episode packs and the power bundle. 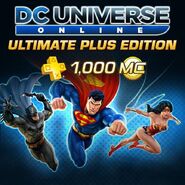 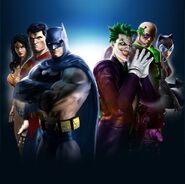 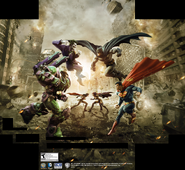 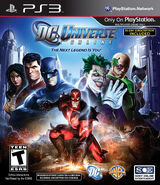 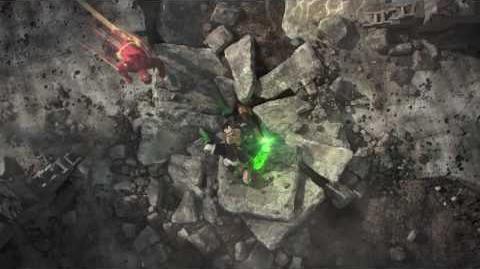 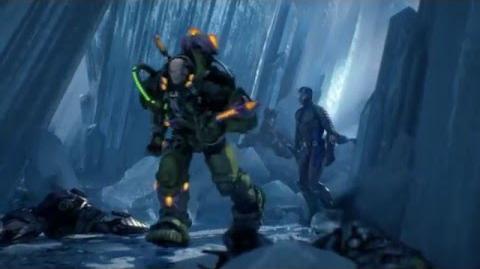