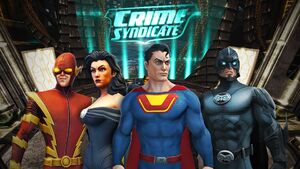 The Crime Syndicate of America is an organizational alliance comprised of the most powerful and most influential super villains of Earth 3. The alliance first formed to better govern their individual empires and to avoid a catastrophic gang war from occurring.

Retrieved from "https://dcuniverseonline.fandom.com/wiki/Crime_Syndicate_of_America?oldid=233292"
Community content is available under CC-BY-SA unless otherwise noted.