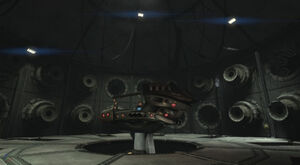 The Cosmic Treadmill is a treadmill that allows any individual with super-speed to travel through time and dimensions more precisely and reliably than if they could on their own.

Since few people have the speed to make it work, the treadmill is usually retained as an exhibit in the Flash Museum, though at times it has been stored in the archives. It is shown that over time the Treadmill can become unstable and unreliable, and cause extreme stress to the mind of the user.

After super-speed vibrations accidentally sent Flash (Barry Allen) into the distant past, he decided to investigate controlled time travel. Over the course of a few weeks he developed a treadmill powered by cosmic rays that, when running at top speed, would trigger specific vibrations that would launch him forward or backward in time. He would stay in that time period by maintaining that internal vibration, and return to his own time by relaxing it. As each era could be accessed by a certain vibration, the treadmill’s controls could be calibrated to produce the exact vibrations he needed to get there.

Since it depended on a speedster’s control of his own molecules, the treadmill was only an expensive curiosity to the general public, and after Barry’s death it became an exhibit at Central City’s Flash Museum.