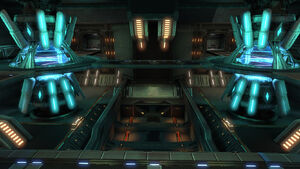 The Watchtower Containment Facility is a high security holding facility where the Justice League of America keeps some of the world's most dangerous criminals in custody.
Patrolled by security robots and various technological countermeasures, this multi-level facility is one of the most advanced facilities of its kind on Earth.

The Containment Facility can be accessed from the Magic Wing's first floor.

When Brainiac turned to attack the Watchtower, he did so by infiltrating the satellite and causing a disruption by freeing the inmates in the Watchtower Containment Facility. Using this as a distraction, he then attempted to overload the satellite's Reactor Core; the resulting explosion of which would destroy the entire satellite. The attempt was, however, stopped by a small group of heroes.