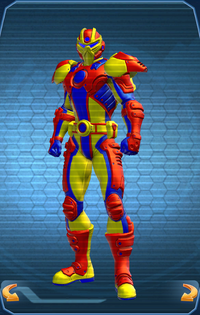 Checkmate Operative is the retired Tier 4 PVP Armor for heroes and villains introduced in Game Update 13 and was purchasable with Marks of Strategy (which replaced Marks of Conquest) obtained in Legends PVP and Arena PVP matches.

While the armor itself is retired, players are still able to buy the styles from Requisitions-H-STYL (Watchtower) and Requisitions-V-STYL (Hall of Doom) for 800 Marks of Valor each and are able to complete The Tactleneck style feat.

Retrieved from "https://dcuniverseonline.fandom.com/wiki/Checkmate_Operative?oldid=234330"
Community content is available under CC-BY-SA unless otherwise noted.