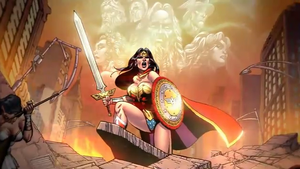 The Champions of Olympus are a select group of mortals and demi-humans that are favoured by the Gods and Goddesses of Olympus to champion their realms of power and represent them in the mortal realm.

As part of the role of being their representatives, the Olympian Gods would at times intervene on their Champion's behalf (appearing to assist them in solving a conflict or problem) or bestow their own powers unto them to increase their strength as an "Avatar". However, if at any time the champion displeased their benefactor god, the god would rescind their favour and support; most often times also causing the champion misfortune as a form of punishment.