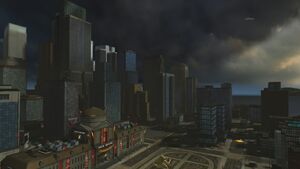 Central City is a city located across the Missouri River from Keystone City, in Kansas.

Only players who have purchased the Lightning Strikes DLC or have Legendary status and have a Combat Rating of 53 or higher can enter the city through a teleporter in the southeast corner of the Hangar (Watchtower), beneath the Tech Wing (heroes).

Unknown assailants have been traveling back in time in an attempt to change events in the past, resulting in tears in the timeline barriers and exposure of the Speed Force at various points in the city. Paradox Reapers have also begun to appear to destroy the current timeline.

Central City (Origin Crisis) is the initial location for the Brothers in Arms and Family Reunion operations.

During the Starro the Conqueror event, the city is turned into the Central City Starro Deluge Zone.

Central City and its sister-city are known as the "Twin Cities" due to their proximity to each other; separated only by a river that runs between them. Citizens are fond of describing the city as; "New York may be the city that never sleeps, but Central City is the city always on the run.”

The city was originally founded in the 19th century and became an important stop for cattle drives. It began to see tremendous growth after the completion of the Transcontinental Railroad, becoming the first major hubs west of Chicago.
A second period of growth occurred after World War I, and it has burgeoned to the present day.

The city is perhaps most famous for being protected by the Flash (Barry Allen), and for being assailed by the various colorful members of The Rogues. 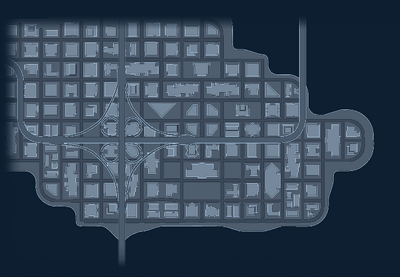 Retrieved from "https://dcuniverseonline.fandom.com/wiki/Central_City?oldid=271213"
Community content is available under CC-BY-SA unless otherwise noted.