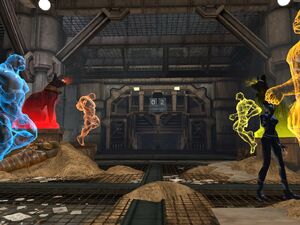 The Cat Avatars are a group of cat-like alien creatures that possess and transform various people when in contact with meteorites known as Mithra meteorites. Largely associated with Hawkman, the avatars are thought of as a Hawkworld Curse that stems back to an unknown period of time.

When Catwoman ends up trying to steal the cat relics from Gotham University Warehouse, it unleashed a bunch of cat-like creatures that have rampaged through the warehouse. Catwoman had to get the players on the hero side to get the Cat's Eye Diamonds back in their rightful in order to prevent all of Gotham City from becoming a "wild kingdom" since they are turning people into cat-like creatures.