"I hated to throw you in the deep end like that, but I had a feeling Aquaman could use the backup. It's a good thing for both Atlantis and Metropolis that you took back control of the outpost. Unfortunately, Ocean Master isn't giving up. He's directing a maritime attack in the strait just north of Little Bohemia. Head to the area and meet with Aquaman to see if you can help turn the tide." — Oracle

By the Shores of Little Bohemia

Aquaman on his frigate

By the Shores of Little Bohemia is a mission given as part of the summer event.

Aquaman is leading the Atlantean effort from aboard a ship in the waters north of Little Bohemia. Go and speak with him to coordinate the next move.

To find Aquaman's Frigate follow the road in front of the Little Bohemia MPD to the right and when you reach the shore, you will see a single yellow ship straight ahead. 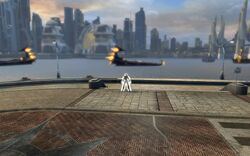 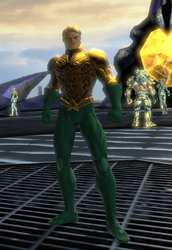 Old Appearance
Add a photo to this gallery
Retrieved from "https://dcuniverseonline.fandom.com/wiki/By_the_Shores_of_Little_Bohemia_(Heroes)?oldid=224982"
Community content is available under CC-BY-SA unless otherwise noted.