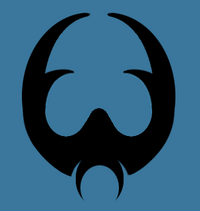 Living in a culture known as the "Insect Empire"; the Bug civilization is made up of several Bug tribes that reside within large underground colonies. The empire is led by a queen "All-Widow" and a male second-in-command known as the "Prime One".
After several years of mistrust and prosecution, the Insect Empire is now represented amongst the New Genesian New Gods through an elected warrior known as the "Forager"; a warrior chosen amongst the bugs who are more humanoid in their appearance and are uncommonly resourceful, exhibit individualistic behavior and are skilled in the arts of war.

The Bugs are a hybrid race of god and insect that were developed by the New Genesians following an attack by Apokolips with biological mutants during the longstanding war between the two worlds. In response, New Genesis developed the Bugs with the intention of deploying them against Apokolips to destroy the world's food resources. However, before the Bugs could be unleashed, a group of them escaped from their gestation facility and hid within the planet's forests. In time, the Bugs started reproducing rapidly and formed large underground colonies that resembled hives, forming what they called the "Insect Empire".

This incident led to the ruling council of New Genesis fearing what the new society might do and so began a campaign of disinformation; claiming that the Bugs were the products of biological weapons deployed by Darkseid. This allowed for extermination programs to be initiated against the Bugs, such as the creation of an elite extermination squad known as the Monitors and formation of special pesticides to allow the crops to remain unharmed whilst killing the insectoids. These efforts had the impact of keeping the Bug population in check though their high rate of reproduction meant that this has no serious impact on the Insect Empire.

Following the birth of a Bug that would be later known as "Forager", it was deemed that his appearance and capabilities meant that he had more in common with the New Gods than the Bugs. Thus, the reigning Prime One charged him with the task of befriending the Gods of New Genesis in order to negotiate a truce between the two cultures. Eventually, Forager befriended the New God, Orion, and stopped the renegade Bug "Mantis" from conquering Earth in Darkseid's name. However, Forager ultimately fell in battle and Orion took the deceased Forager's body to the Bugs for a proper burial where he was shocked to see the sophistication of insect civilization. Thus, peace talks began between the Empire's All-Widow and the new Prime One and the ruling council of New Genesis.