DC Universe Online Wiki
Register
Don't have an account?
Sign In
Advertisement
in: Fight for the Light, The Battle for Earth, Groups, Brainiac 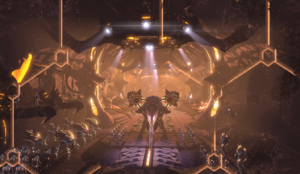 Brainiac's Forces comprise of robotic engines crafted into the mold of humanoids. Using nanite technology and carring within each drone the total of Brainiac's programming, Brainiac's Forces consist of various advanced mechanical drones and hunter-killer machines of varying shapes and sizes.

These forces are designed specifically for the purpose of acquiring, analysing, dominating and then destroying planetoid races of varying appearances and structure, and as such each mechanical apparition is designed for a specific function and to perform that said function at the most optimum and efficient way possible.

Due to their status as mechanical drones, Brainiac is capable of producing a virtually endless army of forces as required to meet his objectives.