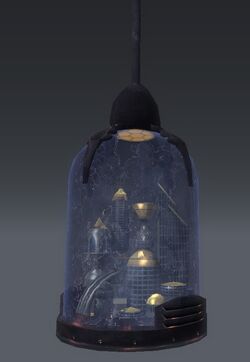 The Bottle City of Kandor is the former capital city of the planet Krypton. The city was originally one of Krypton's largest and most important cities, until it was shrunken and abducted by Brainiac to observe their culture a few years before the planet's destruction.

Kandor served as Krypton's capital and main cultural center. It was the original location of the Kryptonian Council, Krypton's governing body, and featured a prominent holographic representation of Krypton's sun, Rao. Throughout the city there were theaters, temples to Rao, and shining pyramids; There was a wide variety of vastly different types of architecture, as the different guilds on Krypton chose different styles for their edifice. Some towers on Kandor were even constructed entirely from Sunstone Crystal.

Kandor was originally a trading point between the island of Vathlo and the continent of Twenx. From this, it developed into a center of commerce. People flocked to the city from all corners of the map, seeing the city as a chance to gain work and make a fresh start.
The city's organizational structure was dominated by the Guilds: the Military Guild, the Science Guild, the Artists Guild and the Labor Guild. The city is controlled by a council with representative from every guild except the Labor Guild.

When the moon of Krypton was destroyed by renegade scientist Jax-Ur during a botched attempt at interstellar space travel, a lunar colony of the city of Kandor was lost as well, drawing the attention of the Coluan villain Brainiac to the city of Kandor. Brainiac bottled the entire city of Kandor and miniaturized it within his spaceship before leaving. Kryptonopolis became the capital city of Krypton after Kandor's abduction.

Some time later, a mysterious "Green Plague" was killing Kryptonians by the hundreds, and upon researching the matter, Jor-El and his mentor, Non, discovered that the cause was from a growing radiation produced by the planet's increasingly unstable core.
When the Science Council dismissed their assertions as a vehicle of paranoia and discord Jor-El, reasoning that modern Kryptonian society had grown cold, unfeeling and thus decadent began making plans to save his son, Kal-El, from the planet's destruction. Jor-El's brother, Zor-El, heeded his brother's warnings and reverse-engineered the force field technology left behind from Brainiac's abduction of Kandor. Although Zor-El could not perfect the device, he did succeed in creating a force field bubble that would enable Argo City to survive Krypton's destruction.
However, Brainiac eventually sensed that his technology was being used elsewhere and tracked Argo City down. He assimilated the city and merged it with Kandor as Krypton was in the process of exploding. During the assimilation, Zor-El and his wife, Alura, were able to send their teenage daughter, Kara Zor-El in a rocket ship programmed to follow after that of baby Kal-El.