DC Universe Online Wiki
Register
Don't have an account?
Sign In
Advertisement
in: The Battle for Earth, Brainiac, Glossary 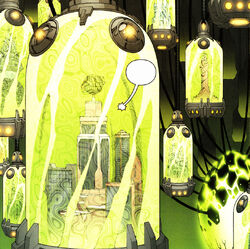 A Bottle City is an abducted location, miniaturized and stored within a life-sustaining "bottle" by Brainiac for the purpose of study and analysis.
Once he has obtained all that he wishes to know, Brainiac can extinguish the bottle's life-support systems and digitize the bottle's contents to be reused at a later date to house another abducted location.

Using his advanced understanding of mechanical engineering, bio-engineering, physics, and other theoretical and applied sciences, as well as extensive knowledge of various alien technologies, Brainiac is able to create various force fields the likes of which can not be penetrated even by Superman.

Utilizing these force fields, Brainiac has formed a strategy where he erects such fields around locations on target worlds and forcibly removes them from their foundations for the purpose of miniaturization and study on board his ship. This practice usually proceeds the destruction of the target planet.
These abducted locations are later stored in life-sustaining jars, becoming "bottled cities".