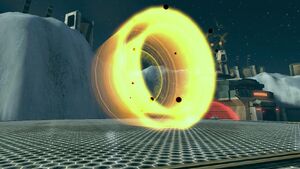 A Boom Tube allows people and objects to travel interstellar distances, and between dimensions, quickly by creating an apparent tube between two points through which people can travel.
When used, a low humming accompanies the formation of the "tube" - a tunnel of rippling circles of light - which increases as the tube is maintained and traversed, ultimately culminating in a loud "booming" noise when it closes. This "boom" has been known to knock bystanders off their feet and shatter glass, and gives the technology its name.

The tubes need to be generated or opened by another device, commonly a Mother Box. 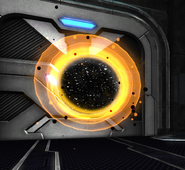