Blaze Comics is a comic book publisher noted for publishing Booster Gold's own comic book series that were based on his alleged superhero adventures. 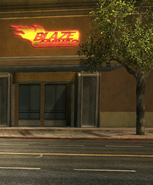 Retrieved from "https://dcuniverseonline.fandom.com/wiki/Blaze_Comics?oldid=232499"
Community content is available under CC-BY-SA unless otherwise noted.