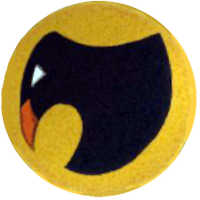 The Blackhawk Squadron is a team of elite combat pilots led by Janos "Blackhawk" Prohaska, first formed in the early stages of World War II to combat the Axis Powers. The Blackhawk Squadron operated from hidden airbases, known as "Blackhawk Islands", and piloted a variety of aircraft; but seemed to give special favouritism to the Grumman XF5F Skyrocket.
Following the end of the war the team remained active to combat the "Communist Threat" before being decommissioned and turned into an air courier service during "peacetime".

The Squadron frequently squared off against fantastical war machines ranging from amphibious "shark planes" and flying tanks, to the "War Wheel"; a gigantic rolling behemoth adorned with spikes and machine guns.

Janos "Blackhawk" Prohaska of Poland served with the Bell Heywood Squadron of the International Brigades during the Spanish Civil War as a member of the Communist party, gaining an international reputation as a flyer of amazing skill and courage, until he was expelled by Joseph Stalin after opposing the Molotov–Ribbentrop Pact, a 1939 treaty of non-aggression between the Soviets and Nazi German.
At one point finding himself in the U.S. in hopes of gathering funds to build a European resistance group against the growing German threat, Blackhawk is framed for a series of murders. With the help of the Sandman, he's ultimately exonerated.
When Poland fell victim to Nazi Germany's blitzkrieg warfare in 1939, Blackhawk returned home to help defend his homeland but was unable to defeat the German "Butcher Squadron" and is soon forced to flee to Britain with his friends Stanislaw "Stan" Drozdowski and Kazimierc "Zeg" Zegota, where they form the "Blackhawk Squadron" to resist the invaders of their homeland from a secret base they dubbed "Blackhawk Island".

As the Squadron's reputation grew, American aviatrix Zinda Blake, determined to become the first female core member of the Squadron, trained herself to pilot a wide range of modern aircraft and made herself an expert in various forms of combat and weaponry. Spontaneously appearing in Africa to help the Squadron rescue Olaf from the pirate known as "the Scavenger", Zinda's request for membership was rebuffed; being told that the Blackhawk codes forbade a woman from joining the team.
A short time later, the Scavenger returned and managed to capture the entire Blackhawk Squadron, holding them prisoner within his floating island citadel. Ignoring the code, Blackhawk sent a radio signal to Zinda who arrived just in time to help extradite the captured Blackhawks and defeat the Scavenger. In recognition of her resourcefulness and bravery, Blackhawk found a loophole in the code that allowed her to become an honorary member of the team and become the first "Lady Blackhawk".
Also during this time, Lieutenant Theodore Gaynor of the United States Marine Corps joined the team when Weng Chan took a leave of absence to fight the Japanese in China. Gaynor left the team after it was learned his "hardline stance against the Germans" included the execution of not only Nazi soldiers, but also civilians.

As the World War ended and the war against the "Communist Threat" began, Blackhawk found himself yet again under suspicion by the U.S. Government for his Communist ties. Around this same time, the Blackhawks are joined by Captain Natalie Reed, a brilliant Russian-American flight engineer who redesigns the Blackhawks' aircraft and is soon thereafter dubbed as the second "Lady Blackhawk" by the U.S. press. It is with her help that Blackhawk is able to exonerate himself from suspicion by stopping Nazi agent and onetime Hollywood actor Death Mayhew from detonating an atomic bomb in New York City.

The C.I.A. later recruited the Blackhawks, and moved "Blackhawk Airways" to Washington, D.C., the U.S. Government wanted more control over the team and their missions; wishing to incorporate the squadron fully to serve the U.S.'s interests. When Blackhawk objected; citing that the team was an international force, the team was imprisoned until rescued by Blackhawk and new recruit Paco Herrera.
The isle of Pontalba was then transformed into the new Blackhawk Island and the Blackhawks severed all ties with the C.I.A. and the U.S. Government.

Years after the Squadron's official decommissioning, Weng Chan formed an civilian-run air courier service, Blackhawk Express, while his nephew Lee Cheng, formed and ran Blackhawk Industries. While primarily and publicly an air courier service, the company secretly assembled its own team of combat pilots who fought crime in the decades ahead.
While it is known that U.S. President Lex Luthor employed the new Blackhawk Squadron during the Imperiex War, the current whereabouts of the team is not known.