DC Universe Online Wiki
Register
Don't have an account?
Sign In
Advertisement
in: Episode 18, Operations, War of the Light Part III,
and 6 more

"Ranx and Qward are both under attack. And even I cannot be in two places at once, therefor you will find Lyssa Drak and assist her in defending Ranx. I will head to Qward immediately." — Sinestro 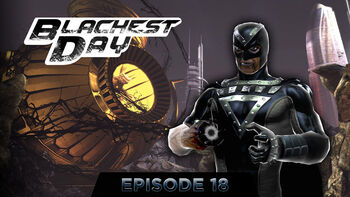 Blackest Day is a Tier 3 8 player Operation in Episode 18 released on November 4th, 2015. It also features an elite version.

Access to the Blackest Day Operation requires a Combat Rating of 100.
The War of the Light storyline is rocketing toward and epic finale. In Blackest Day, the players have appeared on the board and Black Hand is revealed, in his attempt to further the spread of The Black to Ranx and beyond. Sinestro calls for any assistance possible, and the rest is up to the Heroes and Villains.
Blackest Day is part of Episode 18 together with The Demon's Pit.

And so begins the penultimate episode of the War of the Light saga. An epic finish to an epic story begins now.
The stars grow dim as the Black Lanterns spread across the universe. Oa and Zamaron are still reeling from the attack, but the Corruption hasn't stopped there. Black Hand, herald of Nekron, has finally revealed himself by attacking the Sinestro Corps' sentient city, Ranx! He aims to turn Ranx into a dangerous Corruption-spreading machine that could wipe out not only Mogo and Earth, but the rest of the universe as well. Sinestro conscribes every last one of you to help prevent Ranx from falling into the enemy's black hand.

The enemy combat rating is 146.