DC Universe Online Wiki
Register
Don't have an account?
Sign In
Advertisement
in: The Last Laugh, War of the Light Part I, Villains,
and 10 more

Black Adam is Shazam's arch-nemesis: a dark reflection of the powers of the Egyptian gods. Driven by his constant anger and desire for vengeance, Adam's stamina of Shu, speed of Heru, strength of Amon, wisdom of Zehuit, power of Aton, and courage of Mehu (S.H.A.Z.A.M.) can level cities in moments.

Once an ancient Egyptian slave who received the powers of the Wizard Shazam, Teth-Adam was imprisoned for corrupution and misuse of power.

Jealous of Earth's new Mighty Champion, Adam believes he is the right person to lead humanity and any action he takes is necessary for the greater good. One of the world’s foremost wielders of magic, Black Adam has been both hero and villain over a life that’s spanned thousands of years.

The original champion of the wizard Shazam during Ancient Egypt, Teth-Adam lost his way after the deaths of his wife and children and used his powers for selfish gain, becoming known as the Black Adam.
Entombed by Shazam, Adam was inadvertently released by the Batson family and has since acted as Shazam’s polar nemesis.

Warped by loss and tragedy, Black Adam is determined to resurrect his dead love, Isis. 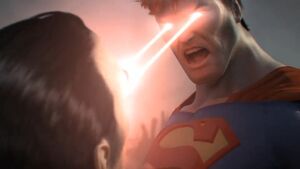 In the alternate timeline where the conflict between heroes and villains has escalated to war, Black Adam challenges Green Lantern (Hal Jordan) to battle following the latter slaying Giganta. As Adam overpowers Jordan, Flash (Barry Allen) races to his assistance, however, Adam ignites a combined explosion as Hal's gathered Willpower, Barry's Speed Force and Adam's Power Word converge, disrupting the entire battlefield and killing numerous soldiers on both sides. On Luthor's order, Adam then confronts a newly empowered and enraged Superman. Superman easily overpowers him, killing Adam with his heat vision.

As Brainiac begins his invasion, Luthor has Adam use his power word one last time to free his armour from Brainiac's control. However, as Adam was now dead, Teth Adam was no longer able to transform and Luthor left him to be eviscerated by Brainiac's Enforcers.