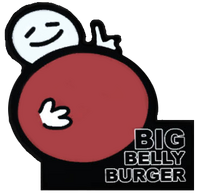 Big Belly Burger, also known as Big Belly Burgers, is a fast-food burger chain in the DC Universe. The franchise was originally founded in Coast City and has since expanded nation-wide.
As a subsidiary of LexCorp, the company enjoys widespread marketing and is only rivaled by O'Shaughnessy's. Their mascot was originally that of a large, red bearded man holding a giant burger, however, the mascot has since changed to that of a cartoon character holding a red, rotund belly in satisfaction. 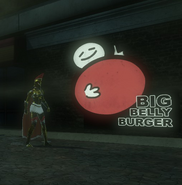