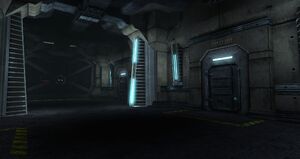 The Belle Reve Federal Penitentiary is a government funded prison facility used to contain metahuman criminals. Used as a prison and holding facility, the penitentiary is also used as the undisclosed base of operations for Task Force X (aka the Suicide Squad).

Built on the estate of an old plantation, the penitentiary is located in the middle of swampland in Terrebonne Parish, Louisiana. It was chosen by Amanda Waller as the headquarters of Task Force X because of the high concentration of super humans who had very little to lose and everything to gain by participating in a program that could shorten their sentence, should they survive their missions.

Many of the prison staff double as the "Ground Crew" staff for Squad operations. The prison has been attacked numerous times, and has also withstood numerous governmental and civilian inquiries due to the questionable practice of housing a group of convicted criminals for use in dangerous missions. During the Janus Directive incident, Belle Reeve was subject to a joint attack by Checkmate, the Atom Project and the Force of July.