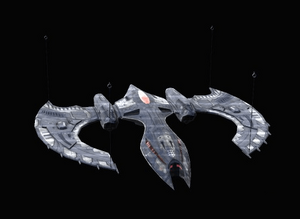 The Batwing is a classification given to certain models of Batman's aerial fleet. Usually reserved for single-pilot aircraft that possess the silhouette of a bat in their physical design, this current model is capable of both atmospheric and space flight and is Batman's current aerial vehicle-of-choice.

Capable of vertical take-off/landings due to the ability to rotate its twin engines, this model's avionic and optical sensors reside behind red transparent casings while, in terms of weaponry, the Batwing possesses twin gun emplacements in its nose.