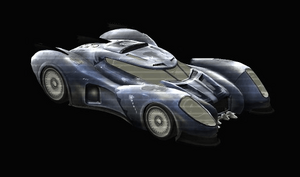 The Batmobile is a classification given to certain models of Batman's fleet of road vehicles. While Batman refers to the vehicle simple as "the Car", Richard Grayson started calling it "the Batmobile" and the name stuck.

With each car built and designed from scratch by Batman himself, the Batmobile is a custom, highly-modified road vehicle that far exceeds the capabilities of any vehicle of its kind in the open market.
A variable tank on wheels, each Batmobile is armoured, highly manueverable and possesses numerous non-lethal deterrents to be used in Batman's war on crime.

Batman in the cockpit of the Batmobile