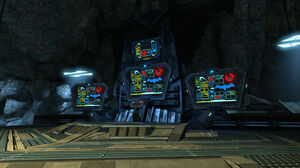 The Batcave Mainframe, or the Batcomputer, is a powerful supercomputer that possesses one of the largest technological databases on Earth. Developed by the Batman, the mainframe possesses digital files for every person, item, vehicle and subject on the planet.

Originally operating with a physical filing system, Batman quickly began using a computer to more efficiently manage his files, in addition to taking advantage of the processing power to more efficiently process his cases.
As the vigilante moved his utilities into the cave system beneath Wayne Manor, the computer was similarly relocated and modified with state-of-the-art technology "acquired" from WayneTech. As the cave's amenities increased, with the addition of various workstations and forensic laboratories, the computer's tasks grew and Batman evolved the computer further as technology progressed until it became what can now only be described as a hybrid supercomputer that runs on par with the likes of some of the most advanced international agencies on Earth.

Following the cave's destruction due to an earthquake and subsequent restructuring, the computer was remodeled into an "island" central computer terminal, situated atop a rock ledge on the main level of the cave. Upgraded once again, the computer is now supported by seven Cray T932 "Plug-In" mainframe modules and possesses holographic displays that provide three-dimensional imaging, while a retractable glass map features detailed diagrams of the newly rebuilt Gotham, as well as archival maps of the ruined city beneath.