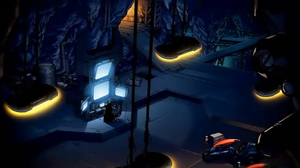 The Batcave has always been the home, sanctuary and base of the Batman and his family. Located directly underneath Wayne Manor the cave was first discovered by a young Bruce Wayne when he was four years old, stumbling and falling into one the of the many grottoes on the estate. Years later he would begin to use the caves to store his equipment secretly as the vigilante Batman, eventually transforming the cave itself into a base of operations for his continuing war on crime.

Due to its nature, the Batcave is a nexus of technology, thought and information that of which Brainiac hopes to claim in his conquest of Earth and the Multiverse.

With the catacombs long been the home of the Miagani Tribe since the prehistoric era, the cave systems were later abandoned due to the tribe's disappearance and rediscovered and used by Bruce Wayne's ancestors as a storehouse as well as a means of transporting escaped slaves during the Civil War era. The 18th century frontier hero Tomahawk also once discovered a gargantuan bat (owned by Morgaine le Fey of Arthurian legend) inside what can be assumed will become the Batcave before Bruce Wayne himself rediscovered them when he fell through a dilapidated well on his estate.

Upon his initial foray into crime-fighting, Bruce Wayne used the caves as a sanctum and to store his then-minimal equipment. As time went on, Wayne found the place ideal to create a stronghold for his war against crime, and has incorporated a plethora of equipment as well as expanding the cave for specific uses.

Due to the Gotham Cataclysm, an earthquake that leveled the majority of Gotham City, the cave systems were restructured by the quake, forcing Batman to rebuild and update the cave into a larger, even more formidable lair than before. 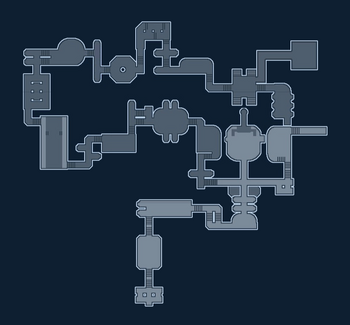 Marked as a priority target by Brainiac following the JLA Watchtower in digitizing Earth, the Batcave comes under attack as Brainiac's Forces and Brother Eye locate and infiltrate the cave systems and begin converting the cave into a Brainiac Construct, consuming the Bat Family with OMAC technology in the process.

While initially entering Batcave: Outer Caverns following a lack of contact from Batman, new heroes meet up with Batman in combating Brother Eye in Batcave: Inner Sanctum before being commanded by Superman following Batman being turned into an OMAC by Brother Eye upon the latter's defeat. They must confront Brainiac in the final raid, Batcave: Brainiac Sub-Construct.