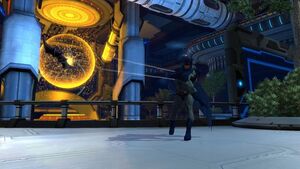 The Batarang is a bat-shaped throwing weapon used by the Batman and his associates as a non-lethal ranged attack alternative to firearms.

Inspired by the Australian boomerang, the Batarang can incapacitate a foe, knock weapons out of assailants' hands, or travel long distances to attach itself to objects.
Through the years Batman developed other uses for the Batarang, including a veritable arsenal of customized Batarangs that wailed like a siren, emitted smoke, exploded, acted as tracer beacons, amongst others. Batman also developed smaller Batarangs that worked like Japanese shuriken or darts, sharpened to cut into criminals' hands or arms in order to disarm them.

The earliest renditions of the weapon were scalloped, metal boomerangs which were used to attack opponents and return to the thrower in one throw. Variations of these batarangs include those which were able to be folded for compact storage, those which can be explosively charged and those which are electrified. A grappling hook made out of a batarang and a rope was common until Batman began using an upgraded grappling hook device.

Since the first rendition, batarangs have been shown for varying purposes in varying shapes and sizes from sharp to blunt, explosive, impact, electric, adhessive and cutting.