BOUNTY: Bizarro is a bounty mission for villain players, accessible via the Bounty Poster in the Little Bohemia Nightclub safe house. The mission's task is to locate and defeat Bizarro, a failed Superman clone.

Wanted! LexCorp seeks the defeat of Bizarro. Considered a serious threat: do not approach alone.

(Please note that this walkthrough was written when this mission still was level 13.)

Players could either defeat Bizarro once and automatically get the mission again or go to a wanted poster to start it straight away.

Bizzaro hits like a truck, for a mob of this level he hits disproportionally hard.

A Tank in the group is advisable during this encounter. He will use his freeze vision (most dangerous attack, hits up to at least 401 and grounds players, unavoidable and very long range) and heat breath (which he does after visibly sucking in air, hits rapid 40s but easily dodged), but no real stuns to contend with, just large spikes of damage that you either have to heal or try and burn through before he kills you all.

Bizarro tends to lock onto a target for some time - it might be beneficial to stay in melee range, or else he would spam freeze vision repeatedly, dealing very high damage that not even a healer could come close to fully mitigate. He is also rather persistent and players should expect to be hit with freeze vision at least twice more as they attempt to escape.

His heat breath is not as deadly due to warning, relatively low damage and slow attack speed, and one heat breath is almost two fewer freeze visions.

The patients and security guards will see him and automatically attack him, but dealing no real damage while being killed in a couple of hits. The security guards can still attack you when you are fighting Bizarro.

Unlike most opponents, he does not seem to recognize a Clown Box as an opponent, meaning that even if he is chasing a player, when the player hides within a Clown Box he would go after someone else instead, making it ineffective against him. 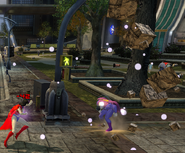 The location of Officer Field
Add a photo to this gallery
Retrieved from "https://dcuniverseonline.fandom.com/wiki/BOUNTY:_Bizarro?oldid=236336"
Community content is available under CC-BY-SA unless otherwise noted.