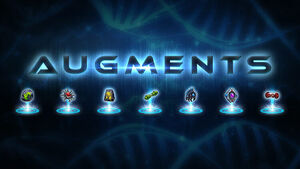 Augments are powerful new items within DCUO that are replacing R&D mods. They perform a similar function to what R&D mods did previously in the game, but with a few key differences that should make them a much more enjoyable player experience.

The modern superhero and supervillain is always evolving, seeking out and utilizing the latest magic, metagenes, and tech available for advantage in the field. For years in DCUO, this has meant a focus on the Research and Development of combat equipment mods powered by Exobit fragments left over from Lex Luthor's desperate gambit to prepare the world for Brainiac. This technology has served the world well, but a new breakthrough is on the horizon that leading scientists and engineers think will make equipment mods obsolete. Why modify gear, when the technology may soon exist to modify the body?

Designed to supplant and replace the current R&D mod system, Augments are similar to but go beyond equipment mods. Instead of socketing into gear like mods (and then needing to be moved and replaced frequently), Augments socket into your character's body directly, rank up like Artifacts, and provide a wide array of new bonuses and stats.

Instead of modding gear, you can now equip augments on your character via a brand new tab in the Inventory Menu titled Augments. They do not take up inventory space.

Augments can be ranked up similarly to Artifacts via Exobytes, Nth Metal and other items that grant XP in the Fortify menu.

Augments come in two varieties: Origin Augments (called Implants, Runes, or Metagenes - depending on your character type) and Adaptive Augments.

Origin Augments are very simple – they have no breakthroughs to hit and simply level up as you feed them items that grant XP. As of Long Live the Legion, their maximum rank is 287, requiring about 5.2 million XP each to reach.

Adaptive Augments are associated with a specific piece of Content (starting with Teen Titans: The Judas Contract). Like Artifacts, these Augments have breakthroughs when ranking up and will grant you content-specific bonuses for the Content they are associated with in addition to the usual stat gains.

The transition to the new Augments system mentioned above has been implemented in a few different ways:

When you log into the game if you are past Level 25, you will find all Origin Augments now automatically available under your Augments tab in the Inventory menu.

You also now have an auto-completed mission in your Mission Journal called Building a Power Base. Completing this mission grants you Augment XP in the form of Golden Exobytes that can be fed to your Augments. The Exobytes you receive are based on your player character’s CR when you complete the mission.

The ability to craft gear mods or generator mods has been removed, leaving enhanced styles and consumables to craft only.

Old items such as old exobytes, simple materials, complex materials, scraps, exobits, and other random crafting items are now worth Augment XP and can be fed into your Augments.

There is a new crafting ingredient called Exo-Material, which replaces the crafting requirements of removed crafting items in all remaining recipes.

Old exobit clusters when used now grant between 1 and 3 Exo-Materials. If you are a member, you will always receive a bonus Exo-Material.

All feats relating to things that can no longer be accomplished as a result of this transition will be auto-completed.