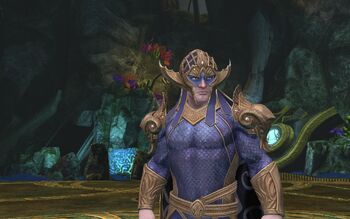 Atlantis: The Throne is a Tier 5 8-player operation in Atlantis released in November 2018. It also features an elite version.

Access to Atlantis: The Throne requires a Combat Rating of 210.

This is it, the final battle with the deadly usurper himself – Corum Rath! Everyone’s help will be needed in this fight to end his reign and restore Atlantis to its former glory, but be wary, for the mad king may have a big surprise up his sleeve!

Corum Rath's descent into madness has made him a greater threat than ever. The time has come to confront him and restore Atlantis!

Note that Atlantis Throne Room and Ritual Feeding Chamber are displayed at the same time (with the latter to the northwest), but the name in the top right corner of the map interface depends on which part you are in.

Fight through mobs until you reach the throne room where Corum Rath resides. Black Manta appears, infuriated that he has been robbed of his "destiny" of killing Aquaman; however, Aquaman, leading the players into the room, announces that the reports of his death has been exaggerated and challenges Corum Rath to battle. However, the latter dismisses him as unworthy and drops him and the team into the dungeon below. Black Manta follows and proclaims he would be able to kill Aquaman after all, but Corum Rath informs him that it is actually a feeding chamber - the Sea Beast appears and devours Black Manta.

The Sea Beast stays in the water near the edge of the platform, and can only be attacked when it is not submerged, which it does for several times throughout the battle, during which you must defeat other mobs. Corum Rath cannot be attacked at this point but he will cast spells to disrupt and damage you.

When the Sea Beast is defeated, to Aquaman's great shock, Corum Rath raises Atlantis to the surface! Aquaman throws the Trident of Poseidon at Corum Rath, who catches it with his magic and shatters it.

You must then fight Corum Rath directly in an epic battle in which he can summon several different bosses, including a resurrected Sea Beast, Morgwar, and many different mobs. The Sea Beast cannot be attacked, retains only his Fish Breath attack, and gains a charge attack in which it slides across the whole arena (briefly marked by a line of red arrows, but the area it hits is a lot larger than it indicates), dealing heavy damage to players it hits and knocking them back. There is an orange restoration barrel on the east edge of the arena, respawning about every 70 seconds.

Corum Rath would call upon the artifacts in the arena one by one with different effects, but all of them increase his defence until eventually all attacks only deal 1 damage against him (represented by swirling Zodiac signs around him). You must channel the Zodiac magic yourself to disable the artifacts one by one make him vulnerable again.

He always calls upon the artifacts in a certain order that begins with Sagittarius and ends with Aries, you can see him doing so when there is a brief beam of energy between him and the artifact. The Zodiac ones have a glowing Zodiac symbol above them when active.

All of those actions must be done in order, but despite what Mera says, it does not need to be done with the same players, once step 1 is done any player can do step 2.

When Corum Rath's health is fully depleted, he attempts to evoke the Deep Gods in a last stand; with a final battle cry, Aquaman conjures a trident out of seawater, leaps and smites Corum Rath in a mighty blow that ultimately annihilated the usurper, and the pieces of the Trident of Poseidon come together and reforms anew in his hand.