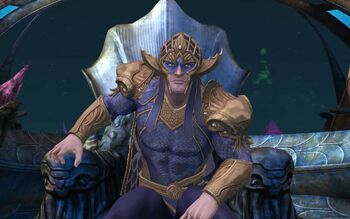 Atlantis: Royal Palace is a Tier 5 Challenge in Atlantis released in November 2018.

Access to Atlantis: Royal Palace requires a Combat Rating of 210.

The House of Atlan has been summoned to the Throne Room of Atlantis. Mera and Aquaman have invited you as a special guest in their court. (Heroes)

The House of Atlan has been summoned to the Throne Room of Atlantis. Ocean Master, known to the Atlanteans as Orm, has invited you to join them as a special guest in their court. (Villains)

There is a monitor that allows you to skip most cutscenes in this instance to the right on the path to the throne room (the option only appears when you move close to it at or below its level; if you swim above it, it doesn't appear no matter how close you are).

Talk to Aquaman/Ocean Master, and enter the room, where the Atlantean Royal Court strips Arthur of his title and accuses him of treason, crowning Corum Rath instead.

After defeating a few waves of his soldiers (there is an Atlantis-style orange restoration barrel spawn at center-north of the room), he summons the deadly Crown of Thorns - an expanding thicket of dark red thorns that will instantly KO you when touched. It is functionally an "advancing wall of doom" that will start chasing you once you move a few steps away from it (however, if you are KO'ed, it will reset to the original position and not move forward until you do, allowing you to interact with Repairman Rodion). If you use warp rally before entering the boss room, it would teleport you behind the Crown and you will be instantly KO'ed.

You will need to keep moving while defeating more soldiers, although for the first couple of Drift Guards, you can hit them at your maximum range, so the wall won't start advancing until you beat them and move on, buying you some time. You must defeat a Drift Lieutenant to open each door behind them. The last door only requires you to interact with a switch - if you manage to finish interacting with it, any mobs chasing you will disappear as you go into cutscene. You can skip most of the fighting on the way simply by using Shield Powers like Telekinetic Shield, but only if your stats are high enough the shields will hold while you open the door.

In the final room is the boss, Commander Zoltar. Mera and Ocean Master will hold back the Crown of Thorns while you battle him. There is an orange barrel on the east side of the chamber.

He starts the battle using Two-Handed; at 75%, 50%, and 25% health, he would jump to a random one of the weapon racks in the room: northwest weapon rack for a Shield, southeast rack for Dual Pistol, or northeast to use Two-Handed again (if you fight him in a spot too far from the rack, he will still jump and fall short, but still change weapons; he takes no damage during the jump and even if you stop him jumping with crown control, he still changes weapons and will sometimes blink to the rack).

Do not attack him when he is surrounded by a sphere of water, as this Water Reflection Shield will fully negate any damage you deal, and you will be hit for 5% of your max health for every hit you make against it. After defeating him, escape by activating the vortex with the machine on the west side of the chamber (this will land you at King Shark's Turf; alternatively you can simply leave by the usual yellow portal after you've completed it once before).