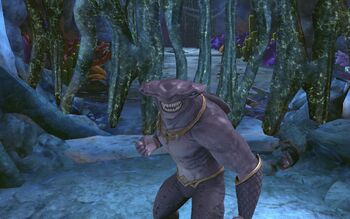 Atlantis: Crown of Thorns is a Tier 5 raid in Atlantis released in November 2018. It also features an elite version.

Access to Atlantis: Crown of Thorns requires a Combat Rating of 210.

With the Trident of Poseidon in hand, Ocean Master and Mera are ready to confront the usurper, Corum Rath. Find a way through the deadly Crown of Thorns and inside the Palace! 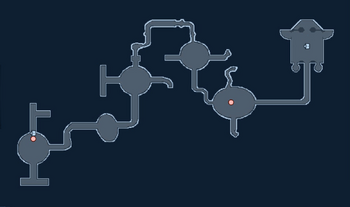 Mera, wielding the Trident of Poseidon, leads Orm and the team through an undersea cave, hoping to be able to enter the Palace under the Crown of Thorns.

You are stopped by King Shark in the first chamber after the entrance, who intends to take the Trident and topple Corum Rath for himself and his people. After defeating him, he will join your cause.

You discover the Crown of Thorns block the path even beneath the seafloor. However, Mera has the crystal retrieved by Aqualad and the players, obtained by defeating the Crown of Thorns Golem in Atlantis: The Silent School. You must dig in the debris around the second chamber, and infuse the crystal with the roots of the Crown of Thorns, creating your own golem that can tunnel through the Crown, all the while fending off Drift soldiers. This process must be done for the third and fourth chambers as well. There is an orange restoration barrel in the northeast corner of the fourth chamber, hidden behind some red coral.

In the final chamber, Mera confronts Murk, furious at his treachery against Arthur. Murk counters he is loyal to his king, Corum Rath, and orders guards to attack you. After a while, he joins the fight himself. After defeating him, he tells Mera to finish him, but she doesn't when Murk reveals he did not kill Aquaman; the latter is being kept, alive albeit injured and weak, in a back room, a sight even Orm reacts to in hopeful surprise. Mera places the trident over him to aid in his recovery, telling him he needs to rest before the upcoming battle.