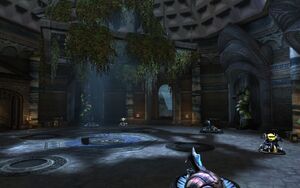 The Atlantean Outpost is a 4 man seasonal alert in the Tides of War event. It will appear in the player's On Duty Menu under Events.

Tides of War is set against the backdrop of Aquaman fighting Ocean Master for the crown of the seas. Their respective followers have amassed fleets around DCUO's cities, and players can assist the side of their choice via with new missions, feats, collections, and a four-person alert. There are plenty of rewards to entice super-loyalty during this event, including pets and costumes. Enter the Atlantean Outpost and face the respective factions leader. 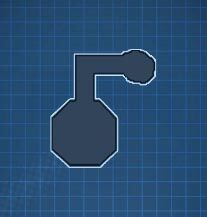 In order to finish the fight all three consoles at the sides must be enabled together within the time limit. If this cannot be achieved, the fight will not end.

The consoles should also be done during the fight. Players will experience a huge knockback before the consoles activate. Just don't run in again immediately after the knockback and you should automagically be near a console to be able to activate it easily.

A healer might be useful, especially for more unexperienced random groups. 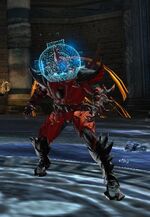 While players of any level above 10 can enter the instance, if they are below a certain level they will be given a power boost while within the instance to stand a fighting chance. This power boost formerly would be physically represented by a water-like "fishbowl" around their heads.