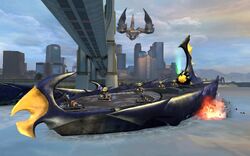 The Atlantean Frigate is a sub-mariner war vessel affiliated with the Kingdom of Atlantis.

Capable of travel both above and below water, the frigate possesses multiple gun turrets on its hull for aggressive combat as well as featuring a sophisticated defensive shielding system for protection. The frigate also possesses long range missiles and torpedoes to bombard their targets from a distance.