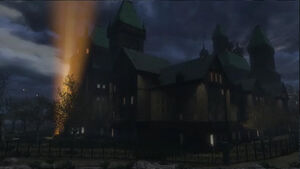 Named for the original asylum director's (Amadeus Arkham) mother, Elizabeth, Arkham Asylum is a government-funded medical institution and penitentiary dedicated to the rehabilitation of the criminally insane located on Arkham Island in Gotham City.

Having being in operation over the years, numerous members of Gotham City's criminals have been or are being admitted to the Arkham institution.

Inheriting the family mansion, Amadeus Arkham had it converted into an asylum in an effort to help heal the ill of Gotham City. With the mansion constantly being rebuilt and added on to over the years, Amadeus himself was slowly driven insane following the grisly murder of his wife and child by a lunatic named Martin "Mad Dog" Hawkins. Dying inside his own hospital, custodianship of Arkham Asylum was passed down to his nephew, Jeremiah Arkham.

Jermiah Arkham took a hardline approach towards the care of his patients. He completely renovated the interior of the hospital, tearing away the old Victorian-style architecture, replacing it with newly designed interconnecting corridors patterned in the style of old classical labyrinths. With little regard for the hospital's dark history, Jeremiah was certain to destroy old remnants of the old asylum, including his uncle's private journal. Jeremiah installed the most state-of-the-art security measures when he took control of the asylum. Video recorders were installed in every room and corridor with two guards stationed on every level twenty-four hours a day to discourage bribery. Even Arkham himself was required to present identification to access various levels of the hospital. All exterior windows at Arkham were installed with heat detectors and microwave motion detectors. Magnetic foils in the walls were used to block radio waves from penetrating locked cells.

Despite these additions the facility on the whole proved extremely porous, its residents having escaped on countless occasions. Those released had a high rate of recidivism. Security was uneven as well, to put it kindly, and the asylum's staffing proved questionable at best. The institute itself has been the target of numerous breakouts and attacks that leave the facility requiring reconstruction before it can open again. Despite all that, the asylum remained a functioning facility, relied upon by the government to treat those in need. Other cities across the country have sent their dangerous or insane super-villains to Arkham Asylum despite its somewhat shaky history, believing it better to simply dump the criminal problem on Gotham City. 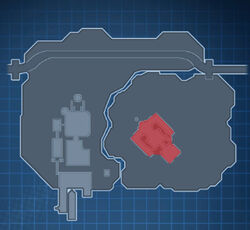 As once again Arkham’s inmates escape from their confines to take advantage of the chaos caused by Brainiac’s attack, a new conspirator appears to be assisting the rogues in their escapades.