Applied Science is a weekly mission for heroes in the Deluge episode.

Scientists believe they have found field weapons that could drive back Starro spores but they need more testing. Go out into the field and activate the experimental weaponry and study its effects.

The enemy combat rating is 235.

The mission is a group mission, though it is possible for experienced players to solo it.

All fields except for electricity will damage the spawning Starros, so moving out of range after activating the device is a good idea. However if the test fields bring down the Starros without the player character doing damage, it will not count.

As the electricity field does not damage the Starros they must be taken down by players, instead of being able to finish them off after the fields bring them to low health. They do very heavy damage and a direct engage may result in a knockout in seconds. Instead, it is possible to use a group crowd control effect on them, and with an expendable pet that does single target damage (e.g. Robot Sidekick) they can be lured over the blocking fence immediately to the east of the electricity field one by one. It is still recommended to take them down with a group of players due to their high damage. 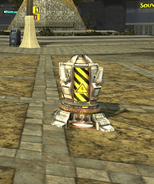 Poison Test Device
Add a photo to this gallery
Retrieved from "https://dcuniverseonline.fandom.com/wiki/Applied_Science_(Heroes)?oldid=225021"
Community content is available under CC-BY-SA unless otherwise noted.