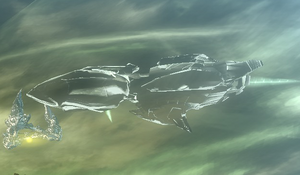 The Amazonian Warship is a medium-sized strike cruiser affiliated with the Amazons of Themyscira.

Originally made from the Lansinarian Morphing Disk; a sentient morphing crystal gifted to Wonder Woman by the subterranean Lansinarian race, the new technology was adopted and adapted by Amazonian ingenuity and allowed the Amazons to create a new warship fleet to replace their traditional, though out-dated, water-bound ships.

Now the pinnacle of Amazonian technology, the ship design propels itself using graviton particles and has the ability to be undetectable by both radar and human eye thanks to the ability to shift from its crystal-appearance to complete invisibility; rendering both itself and its occupants truly invisible.