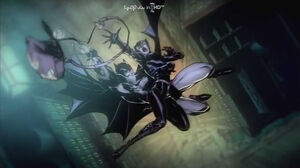 Chosen during Character Creation as a character's Movement Mode, Acrobats are master aerialists and climbers who use their skills to vault across the rooftops with seemingly effortless grace. Acrobats are able to climb and cling to any surface, giving them a unique way to approach both movement and combat. Using a Grapple Line, Acrobats can quickly ascend tall buildings and traverse the gap between skyscrapers, and for movement across the massive cityscapes, Acrobats can even glide across the sky after leaping from vast heights.

Characters with acrobatics can double jump, run at a fast pace (though not as fast as Super Speed), climb buildings with their hands, grapple hook up and to the sides of buildings, and glide from great heights.

At level 9, Acrobatics have the ability to use "Rocket-assisted Glide", where they are able to use Rocket Boosters to glide around the cities without stopping, but they are unable to attack while in this mode. Rocket Boosters can be enabled by pressing "NumLock" on the keyboard (L3 on the PS3 controller) while the character is gliding.

Using Gorilla Form from the Nature power set will change your movement mode to acrobatics.

Grip onto and climb any surface, leaping down to destroy opponents.

Getting around with Acrobatics: PC version[]

The in-game skill page doesn't describe how to activate most of the Acrobatics skills, and doesn't mention most of what you can do with Acrobatics. What follows is a more detailed guide to how to get around a city using Acrobatics. Unless otherwise noted, all this is usable from the start. (Note: all of the following assumes you have Acrobatics toggled on; use F to toggle it on and off)

While on the ground:

While on a wall:

Hold Spacebar: Fire a Grapple Line to rocket up the wall. Keep holding Spacebar to keep going up. (Must be unlocked first by being level 9 and spending a Skill Point.)

Tap Spacebar while facing away from the wall: Jump off the wall.

Directional buttons (The arrow keys, or WASD): Climb up, slide down, or wall-run.

For all of this, keep in mind there is no falling damage, so there's no need to land softly unless you want to.

Press Spacebar: Do another jump; you can only do one midair jump until you touch ground, or a wall. Combo jump/midair jump for a nice double jump.

Hold Spacebar: Begin gliding to move forward and descend much slower. Releasing Spacebar stops the glide, and you drop almost straight down. If you're still in the air, you can hold Spacebar again to resume gliding.

Hold Spacebar while near a wall: Fire a Glide Line to launch towards the wall, then cling to it. (Must be unlocked first by being level 9 and spending a Skill Point.)

Press Numlock: (Must be unlocked first by being level 9 and spending a Skill Point). Begin a Rocket-assisted Glide, moving very fast. Numlock toggles this on and off. Unlike regular gliding, you don't descend. In one of the latest patches (unsure which exactly) the altitude of your glide is no longer defined by surrounding objects and floor level; it can be adjusted manually with W to ascend and S to descend.

Tapping Spacebar will allow you to jump and cancel the glide, causing you to fall down straight. If tapped simultaneously with a directional key, you will jump on that direction. Tap and hold the spacebar for a second time to continue gliding.

Colliding with the floor, wall or ceiling will end this mode, allowing you to sprint or climb walls. Changing form or blocking will also toggle this mode off, e.g Ice Armour wearing off mid flight will cancel the glide, causing you to fall to the floor.