The 25th Century Communicator is a special event trinket that summons a Pet to aid the Player Character.

Using the communicator will grant a 5% Health buff for 30 seconds and summon Servo. Servo is a security robot from the future that will chat with you about various topics, such as your "old" 21st century customs, while watching your back (and attacking your enemies).

The 25th Century Communicator trinket was only given to Players with Legendary-level access on December 2012.

Servo is summoned on activation in addition to a 5% Health buff for 30 seconds.

Since game update 25 this item cannot be used in PvP arenas. 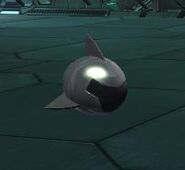 Retrieved from "https://dcuniverseonline.fandom.com/wiki/25th_Century_Communicator?oldid=197955"
Community content is available under CC-BY-SA unless otherwise noted.